My First Time Experience With A Succubus Lover

July 15, 2020 Posted By Michael N
I am going to share my first time experience with a Succubus for you readers that are reading this. What were my thoughts? What were my feelings at the time and how I reacted?

This is my firsthand experience of my first time with a Succubus, I will be using non sexual terms to address some words and I hope you guys will enjoy the read!


She Came In The Night Unexpected

This happened in 2010; It was around 10:00 pm, there I was, on my computer reading about people's true ghost encounters on a website where people tell their ghost stories. Funny thing was, I got pulled into a story about a dude having an encounter with a Succubus.

I was so inclined and excited to read about his experience. It was so fascinating just reading about him getting involved with a beautiful Succubus mistress. The more I read, the deeper I went. I mumbled to myself out loud saying things such as: "I wish I had a Succubus Lover", "I Hope she would come to me right now."

It got to a point where I started reading every guy's Succubus story on the internet and researching about it. I started looking at the pictures and finding out how to have sex with one. About 2 hours later, I decided to call it quits and started playing a game on my Nintendo 3DS.

Right in the middle of my game, the unexpected happen. It was then that I felt a hand glide from the bottom of my scrotum all the way to the top of my shining rod. It was sensational but also terrifying. At that point, I was wondering if I was going crazy or imagining it.

After finishing my game for about 2 hours, it was time for me to go to sleep. It was around 1 am, was when I turned off the lights and jumped into bed. I started to feel a tickle on my right foot like fingers playing footsies with me but with an electrical sensation. The feeling was ecstatic, it was like pins pricking on my foot but with pleasurable feelings. Like how when you squat for a long time, your feet goes numb and a prickling feeling overcomes and it is hard to walk.

This went on for about 5 minutes until I heard a giggle in my mind. That's right! An actual woman's voice was in my mind giggling, very faint but also very sexy. She then proceeded to ask me for my permission. I said "permission to do what?", she said, you know, then proceeded to glide her hand on my scrotum and fondle it. My god was that feeling so damn sensational. It felt like I was a virgin again doing foreplay for the first time. Only the giggling was in her actual voice, she was using my own voice to speak through me. How did I know it was her talking and not my own consciousness? Well, the way she talked was way too different then how I spoke.

While I was thinking to myself, she kept on repeating "please give me permission, I promise you will not regret it." While still fondling my scrotum and tickling it at the same time, she even cupped it in her hands....

Touched For The Very First Time

While all of this was going on, I could hear Madonna's song playing in my head "Like a Virgin". I finally just gave in and said okay, I give you permission. That was when I felt a heaviness on top of me. Like somebody sitting on your genital area. It also felt like 2 hands were placed on my left and right chest.

Then it happened, my rod felt like it was held by her hand and rubbed back and forth on her; what seems like her oyster. Instantly, I was aroused and hard like a rock. I heard her giggle again and she then told me to "Get Ready Playboy".

My rod felt like it was slowly slipping inside an invisible moist oyster. The feeling was hard to explain. It was an electrical feeling but also somewhat physical. I asked myself again, "man, I must be going nuts". She giggled again and said "no you're not, this is actually happening to you right now, so just relax and try not to think about it too much".

To be honest, I was enjoying it way too much. It felt like liquid was dripping down my rod. So when I raised my head up to look at my shining rod, I literally saw my rod moving back and forth like it was having a spasm. It was very intriguing to watch. She said "are you liking what you see?". I told her that all I see is my rod having a spasm with a moist sensation going in and out of an invisible oyster....

She laughed; I thought to myself again, I must be going Schizophrenic. "Darling, you called and I came", was what she said. The feeling was indescribable, it was not of this world. It seemed somewhat like a real oyster that my rod was penetrating but also a different kind of feeling. A better feeling to be exact, one that is the same but also defeats a physical oyster. Heck, this was as physical as it gets, just everything was invisible, even the liquids.

This eventually went on all the way until 5 in the morning. We took breaks here and there for me to recuperate as it got more and more intense. It got to the point where I just wanted to do a physical release for myself. She then told me "do not worry, let me handle it."

That was when I started to feel a burst coming from my rod, as it spasmed harder and faster. After what seemed like a minute, I finally released but....It wasn't physical. Don't get me wrong, I did release but I did not see anything, nada. My whole body orgasmed including my rod and scrotum. It was the best feeling I had ever experienced in my whole life. By that time, I did not have any urge to physically release myself, I felt released already from the body orgasm. I thought to myself, hmm "is this what a woman feels like when she has an orgasm?" She replied, "not quite but close." She said I did release but it was my astral body that released and at that time, I did not know what she was talking about...

She continued to touch me like I was still a virgin...lol...Eventually she left and said she would return tomorrow night for another session and I forgot to ask her what her name was but this became a relationship later on and eventually ended later on. 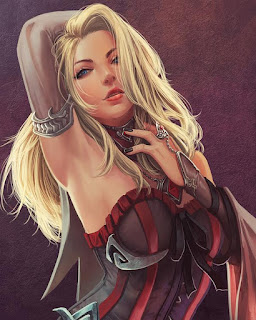 This is what she looked like in my 3rd eye

That was just the beginning of the end of my story with an unknown Succubus. How I reacted and what were my thoughts. It was also the start of my Spiritual Journey which got me into the Metaphysical and Occult. Since then, I started to learn more and more about different kinds of Entities and Spirits. Not just Human spirits but all kinds that are dwelling on the Astral and Physical planes.

I will continue on my story for another time. What we did everyday, which of course was obvious. How did my feelings progress? Why did she eventually leave me? What was the outcome? This is to be continued...

Do you have any questions or inquiries? Do you want to share your first time experience? You can tell me all about it here! You can also comment down below. Please also visit my other website, where you can buy products in all categories ranging from electronics, apparels, home decorations and etc.
Did you ever wondered what your soulmate looked like? If you would ever encounter him or her? Well, now you can with this detailed intricate sketch! CLICK HERE TO FIND OUT!

is that really true bro ? or it is just a lie ? please tell me iam very interested- i hope that everything is true!